Home » Did you know that as of 2013, Bill Gates had personally given US$28 billion to the…

We all know that Bill Gates was the richest man in the world for many years, and he is still among the richest now. With billions upon billions of dollars, he must struggle to spend it all, so what does he really do with it all? 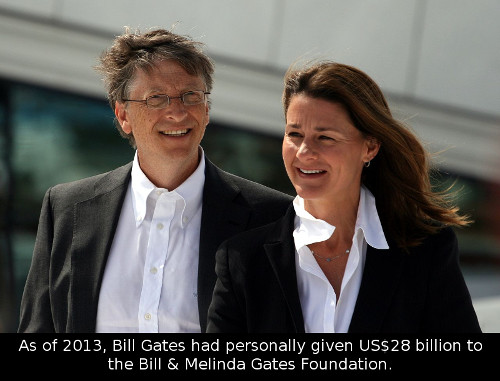 Well, the Bill & Melinda Gates Foundation, is funded by, you guessed it! Bill and Melinda Gates! This foundation was started by them in 2000 and is the world’s largest private foundation, and it’s operated fully transparently. If this is the largest private foundation then, how much money does it really get, and who from? Well, with donations totalling $42.3 billion, two thirds of that, $28 billion, has actually come from Bill Gates himself. Although in 2007, Gates was the second most generous man in the world, second to Warren Buffett, it wouldn’t surprise me that now, after the $28 billion was reached in 2013, Gates is now the most generous man in the world.

What’s so good that he donates so much to this? Well, the foundation’s aims are to improve healthcare and decrease poverty around the world, and more specifically, in America, to boost education and technology!

Despite these claims, the foundation has done much good over the years. In 2006, there was a significant donation to an organisation which helped with the human rights of sex trafficking. It’s help to fund bank accounts for those who get less than $2 per day. Much has been put into research and development of other financial services in poverty stricken areas as well.

There are also great donations given to developing agriculture, as well as water, hygiene and sanitation. For all of these projects hundreds of millions have been given out by this foundation, which has been largely funded by Gates himself.

Perhaps more close to Gates’ heart, it also gives to technological development, one example being the ‘Toilet Challenge’ to help with toilet access to almost a quarter of the world’s population. Many other American universities have also since received donations from the foundation to run development projects similar to this.

Rather unsurprisingly, a big area of interest, rightly so, is world health. Billions of dollars have been given to help fight diseases like Aids, malaria and tuberculosis. For example, with the help of the vaccination, funded by this foundation, death from measles in Africa has dropped, since 2000, by 90%. However, the consequences of diverting these doctors from basic care, to more advanced research, are not seen by all, and is seen as a big opportunity cost.

However, one thing can be sure! Bill Gates has given a lot of his fortune to try and help the world become a better place!