Many of us know about the science fiction, Avatar, by James Cameron which hit the cinemas in 2009. At almost 3 hours long, it was certainly a shock to most of us going to see it, as well as it’s massive $237 million budget, with actual expenses going above $450 million in total, but then with it’s record breaking $2,787,965,087 (almost $3 billion) box office! 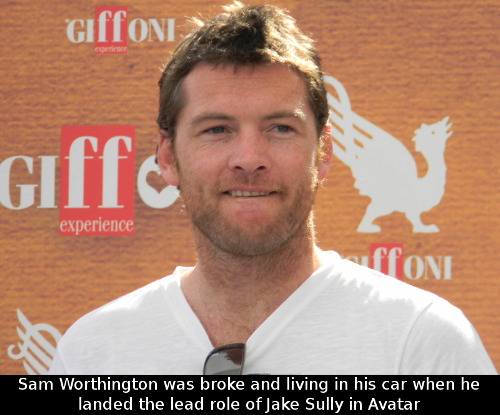 Well, let’s be honest, no film, not even Avatar, could become so successful without a lead actor! Sam Worthington, playing former Marine, Jake Sully was the one James Cameron chose to fulfil this enormous task!

Ironically, Cameron was looking for an unknown in the movie world, in an effort to keep costs down, although, whether this was necessary or not is arguable! An Australian, Worthington was living in his car when he completed two auditions, as well as since being signed up for the possible sequels set to come out in 2017, 2018 and 2019.

Cameron’s feeling about this inexperienced actor was that he had not done any major films which would benefit him in this role.

A quality that is really real.

He has that quality of being a guy you’d want to have a beer with, and he ultimately becomes a leader who transforms the world.

Well, personally, I thought he did a pretty good job as lead actor and I definitely loved the film!