If you’ve been into a McDonalds ever you would’ve seen the Monopoly Millions are out and about, with the chance to win some prizes! All you have to do, is buy food from them, and collect the tickets! Then, you’re in with a chance of getting a car, some money, or even the jackpot – $1,000,000 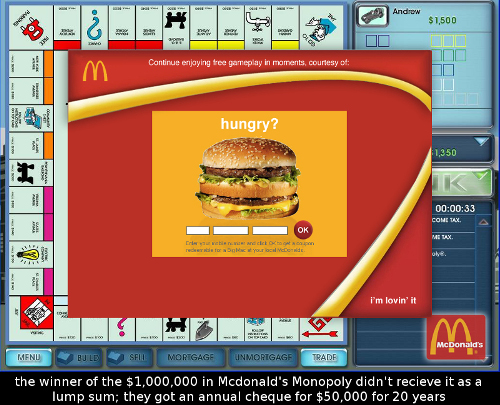 Firstly, if you want a chance of even winning the $1,000,000, the chances are, you’re going to have to buy a lot of things from them – that’s either wasting a lot of food, or getting very fat! In order to win this jackpot, the two pieces you need are ‘Park Place’ and ‘Boardwalk’. Whilst you have a fair, 1 in 11, chance of getting ‘Park Place’, your chances of getting ‘Boardwalk’ are slightly smaller. 1 in 651 million! So, statistically, that’s 1 in 3.5 billion purchases – if you’re going to play the odds, and win on statistics, you’re going to be spending more than you’d receive!

However, if like Jon Kehoe, who won the jackpot in 2010, you managed to get both – he got his on some ribs and drink after being unemployed for almost a year – you won’t be able to pay off the debt you’ve gained from buying all that food! Not very quickly anyway.

Although you may be unlikely to get the jackpot, with a 1 in 4 chance, you might be able to get a McFlurry or some fries, and if you’re eating there anyway, that’s quite nice!

The game actually means you can also get these pieces, without having to buy anything, due to law. Although one man got 98 pieces by taking advantage of this, something which I’ve tried, and depending on the store, it does work, is to ask for some tap water – more often than not, they won’t even think about the chance of winning on the cup as they take it off the stack and give you your free water. I’ve won a few fries through that method, and it’s very satisfying!