Home » Did you know that by 2075, due to human efforts to reverse the damage, the Ozone layer is expected to…

By the time we reach 2075 our planet’s ozone layer will most likely have fully recovered. 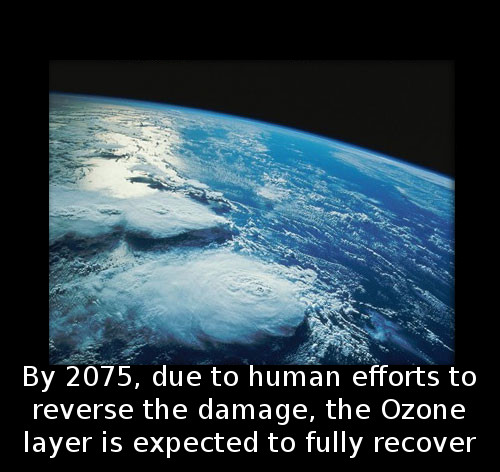 It sounds crazy, doesn’t it? After all, there are so many campaigns and green movements trying to make us more environmentally conscious and green friendly. There are tons of people leading recycling and upcycling life styles. Many manufacturers choose to produce eco-friendly products. And yet, the damage humankind has done to our planet’s ozone layer seems unfixable.

As is turns out, this is not true. The ozone layer will most definitely have fully recovered by the year 2075. In fact, the hole in the layer was significantly smaller in 2009 than it was back in 2008.

Not only that, but it turns out the hole is actually changing its dimensions in relation to the climate on our planet. The whole starts opening up in August and reaches its largest diameter around September – October. By December, it’s already shrank its sizes and closed up. The earliest evidences for the hole in the ozone layer were found back in the 1980s and scientists have predicted that by 2075 there won’t be a hole anymore. Recovering the damage we have done to the Earth’s ozone layer is of extreme importance, because it’s the only thing that is protecting our planet, the flora and fauna and humankind from the scorching ultra-violet rays of our Sun.

Here are some other interesting predictions scientists have made for the 2070s. The 2006 JY26 asteroid will have a 1 in a 71 chance of hitting our planet on the 3rd of May 2073. On the 22nd of February 2074 the 2 Pallas Asteroid will make a record breaking approach to Earth. Nova Scotia, Canada, and NYC, New York, will experience a total solar eclipse on the 1st of May 2079.