Charlie Sheen has made tons of headlines in the past decade, most of which were negative reviews of his bad behavior. Now he’s striking controversy with his newest goal in life – to run for President in the upcoming elections for 2016.

The 49 year old actor, who once played a president in the 2013 action movie Machete Kills, wants to compete for the president office in the 58th presidential elections of the US, which will take place next year. 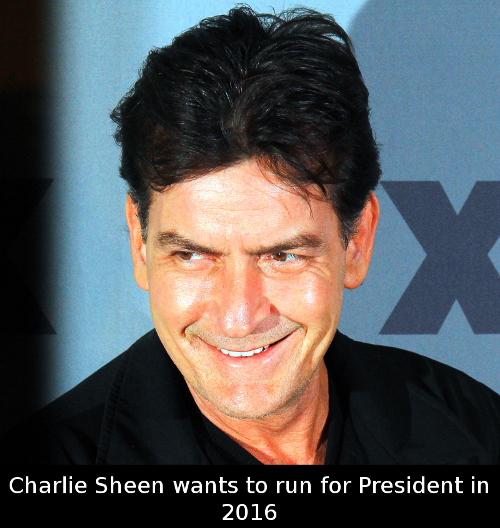 Sheen sees himself as a Constitutional Republican and is convinced that part of the Constitution is for “everybody to relax”. Not only that, but he also has made his mind about his future Vice President. The actor wants his own father to become his Vice President, so that Sheen and Sheen can transform the country. He wants to run a platform of transparency and truth. Furthermore, Sheen shared that he polled nearly 10 people from his surroundings and asked them if he should run for President. They said yes.
Back in 2011 the actor was put in a hypothetical situation where people had to choose between President Obama, Sarah Palin and Sheen for their next president. The 49 year old actor won the “elections” with a 44-42 vote next to Palin.