It sounds like the plot of a bad Katherine Heigl movie. Jamie Jackson is a 37 year old woman from Salt Lake City, Utah, US. Ever since 1996 she has caught – wait for it- a total of 46 wedding bouquets! Jamie has been to almost 100 weddings in the past two decades and has made bouquet catching her hobby. 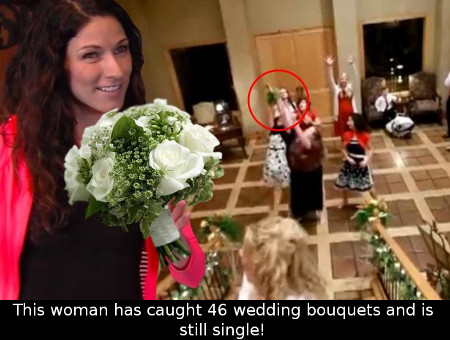 The 37 year old woman’s competitive nature and “catching technique” have made her catch the whopping number of flowers over a little less than 20 years. However, contrary to the belief that the one to catch the bouquet will be the next to marry, Jamie is still single. Nevertheless, she doesn’t see this as a downside and is still collecting wedding bouquets. She’s keeping them in a glass display at her home and is currently trying to get in the world records for it.
A woman from Pennsylvania named Stephanie set a record of 11 bouquets in 2004 and Jamie is now trying to set a new official record. She submitted her request in 2014 and she’s trying to collect a total of 50 bouquets in order to even the number out. If she’s keeping this speed up, she’ll collect them in no time.