Daniel Jacob Radcliffe is an English actor who rose to prominence playing the leading character in the Harry Potter film series (seven fantasy novels written by the British author J.K.Rowling). He is the only child of Alan George Radcliffe and Marcia Jeannine Gresham. 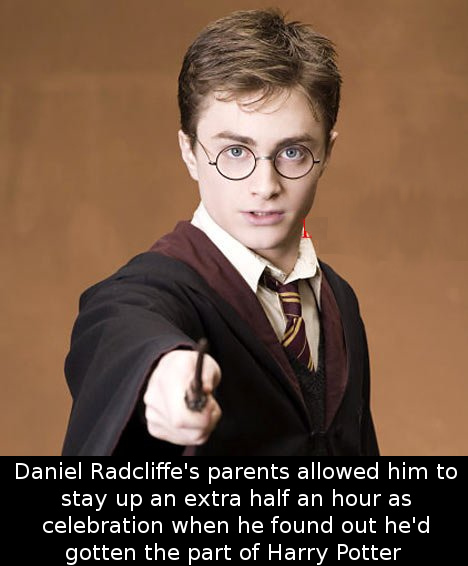 Daniel made his acting debut at 10 years of age in BBC One’s 1999 television movie David Copperfield, followed by his film debut in 2001’s The Tailor of Panama. Radcliffe was only 11 when British film producer David Heyman asked him to audition for the role of Harry Potter for the film adaptation of Harry Potter and the Philosopher’s Stone, the best-selling book by British author J. K. Rowling. When Chris Columbus (the movie’s director) saw the actor in the role of David Copperfield, he thought, “This is what I want. This is Harry Potter“. Rowling also endorsed the selection saying, “I don’t think Chris Columbus could have found a better Harry.”

The initial contract required him to be in Los Angeles, California, for filming the entire seven parts of the Harry Potter series. At first Radcliffe’s parents rejected Harry Potter role. They said to Chris Columbus : “That’s too much disruption to his life. That’s not gonna happen.” The contract was changed to a two-year contract subsequently and Radcliffe went on to become a star. As a celebration his parents allowed him to stay up an extra half an hour. This may sound strange, but discipline is one of the keys to success.
The Harry Potter series is officially the most successful film franchise in history. Today Radcliffe is one of of the richest young people in Britain. 25 years old actor has almost £68 million in his bank accounts.