Dean Smith decided that he wanted to spend the rest of his life with his girlfriend Jennifer. And so he proposed. Only, his proposal was so original that it went instantly viral!

Dean came up with an idea to propose to his partner with a home-made video. He knew how much she loved countdowns, so he made one. The countdown started in January 2014 and it ended exactly 365 days later. 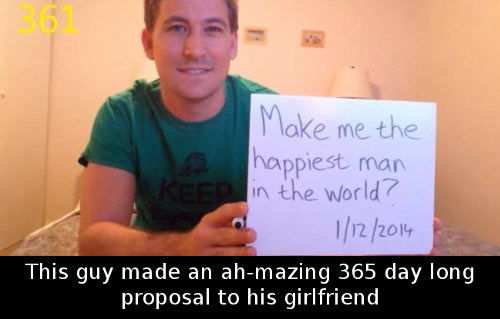 Dean filmed himself holding up handwritten signs, on which he wrote how much he loved Jennifer and that she would make him the happiest man on the planet if she married him.

The 15 minute long video shows Dean reading books, sitting in front of his computer, driving his car, playing with his dog, eating, sleeping, showering, smiling and doing all sorts of everyday tasks while holding up the sings. He filmed a scene each day showing Jennifer that she was always in his mind. He put together the cropped scenes and presented her with the video on her 26th birthday with the help of their families and friends on a beach in Aruba. She said yes.
Dean’s video was uploaded on YouTube in January 2015 and it has already reached more than 16,500,000 views!