Reddit users have helped a man to understand that getting a positive result on a pregnancy test is not as “funny” as most of people think and helped saving his life.
How Reddit users helped him?

A Reddit user uploaded a web comic where his friend tried his ex-fiancee non used pregnancy test . He was shocked when he got the positive result. 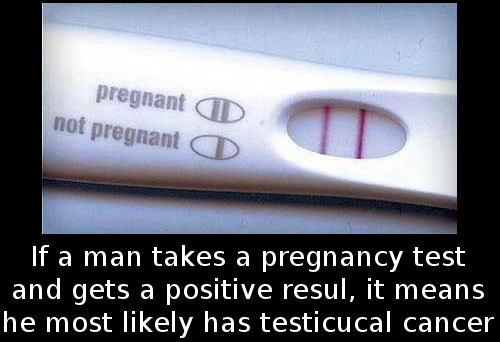 While most of the users thought the story is kind of funny, some pointed out that a positive result could be a sign of cancer. Good minded users sent thousands of letters informing him that his health might be jeopardized, because people with testicular cancers have beta human chorionic gonadotrophin (beta-HCG) chemical. The same hormone is also produced in women by developing placenta, types of ovarian cancer, trophoblastic tumor (uterine cancer) and a mole which grows inside the uterus during the pregnancy.

When somebody with this hormone takes a home pregnancy test, he/she will most likely get a positive result. Blood tests can determine if a person has this hormone .
Except a pregnancy tests , there are other methods including self-tests that can be used to discover a testicular cancer.
The original poster told his friend what Reddit users said, and he decided to get a testicular cancer test. Later the poster reported back, and said that his friend had a small tumor in one of his testicles. The cancer could be treated easily because it was found in its early stage.
The American Cancer Society reports that testicular cancer is one of the most curable forms of cancer.
“So both of us want to say thank you, and in all seriousness, if you are male check yourself for testicular cancer regularly. If you’re a girl test yourself for breast cancer regularly,” the poster wrote in later post.