Redheads are uncommon nowadays, but they were even more so back in Ancient Greece. Dyed red hair was unheard of, and the Ancient Greeks were afraid of those with naturally red hair, believing that they would become vampires after death. 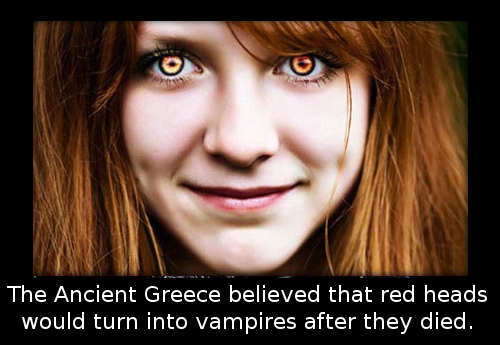 Aristotle, one of Ancient Greece’s most prominent philosophers and students of Plato, described natural redheads as “emotionally un-housebroken”. The flaming hair color might have been linked to an untamable character in Ancient Greece, but the Greeks weren’t the only one to see red hair as a negative. In fact, people in the Middle Ages believed that the color red was the Devil’s color. Furthermore, during the time of the Spanish Inquisition, people believed that redheads were witches and had stolen the fire of Hell, which was considered as serious crime and proof that the redhead was a sorceress.
On the other hand, the Merovingian dynasty of ancient Gaul saw the positive side to the issue and believed that their natural red hair gave them strength and magical powers.