Earlier this February rumors started flying around the Internet that Jamie Dornan wouldn’t start in the 50 Shades of Grey’s sequels.

As it turned out, they weren’t just rumors. However, nobody was certain why Dornan had decided to pull away from the franchise having in mind that the first movie’s success brought Universal Pictures the whopping $486 million. 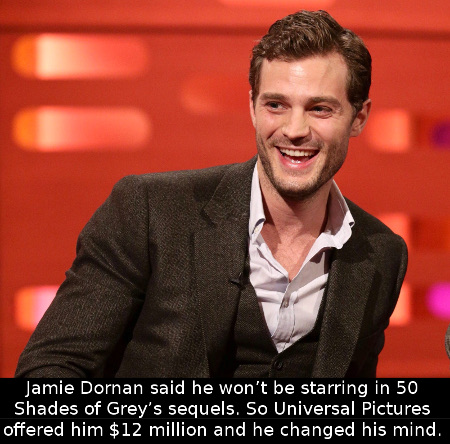 Some websites said that the 32 year old actor’s wife, Amelia Warner, wasn’t happy about the passionate scenes between Dornan and his co-star, Dakota Johnson. Other sources claimed that Dornan was afraid the franchise would damage his reputation and ruin the chance to be seen as a serious actor ever again and that’s why he decided to leave. Regardless of the real reason behind his decision, Universal Pictures weren’t happy about it, so they offered Jamie a deal – instead of the $100,000 he got out of 50 Shades of Grey, he would be paid more than $6 million for 50 Shades Darker and 50 Shades Freed – each! Which means a total of $12 million. A close source to the actor claims that Dornan immediately agreed to go back to the projects.
The shooting for the next installment in the trilogy is set to start this summer.