In February of 1998 it started off as a regular studio session for rapper Ol’ Dirty Bastard and his group Wu Tang Twelve O’clock in Brooklyn, Néw York. While looking out the window of the studio, Ol’ Dirty Bastard seen witnessed a horrific car accident take place. Him and one of his friends, ran as fast as they could to the scene of the accident. They then gathered about a dozen other witnesses at the accident scene to help them lift a 1996 Ford Mustang that was pinned over the wreckage. Among the wreckage they found an injured 4-year old girl once they finally got the car out of the way. 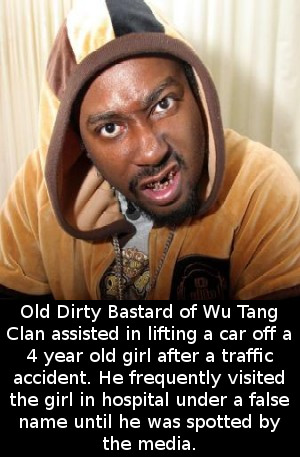 They frantically called 911. The little girl was rushed to the nearest hospital. She suffered from first and second degree burns. Luckily she wasn’t more severely hurt.

In the days following the accident, the rapper couldn’t stop thinking about this little girl whom he watched get into a terrible accident. He made the decision to visit this girl in the hospital. He didn’t want to be noticed and cause a scene from fans so, he used a false name. He continued to visit this girl until one day when he was recognized by the media.