Johnny Depp is one of the greatest actors of our time. He has the talent to get under the skin of every single character he wants to portray and he has tens of different ever-changing faces. One of his most popular roles, the one of Captain Jack Sparrow, is so iconic that Disney is currently shooting a fifth installment of the Pirates of the Caribbean franchise, which was born back in the distant 2003. 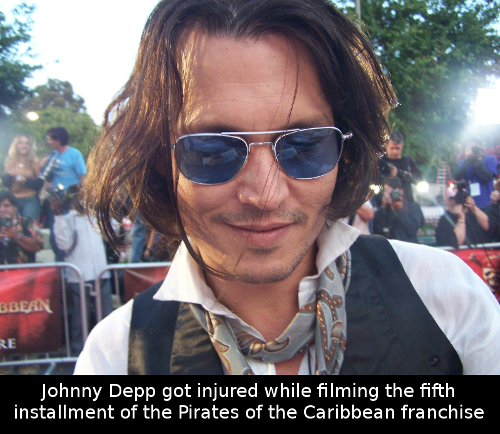 Unfortunately, the 51 year old actor was badly injured when he was filming the upcoming Pirates of the Caribbean: Dead Men Tell No Tales in Queensland, Australia. It’s not clear how exactly Depp got injured, but he hurt his arm so badly that he had to leave Australia and head towards The States in order to undergo a surgery. According to official reports, he will be missing from the filming set for a couple of weeks, although his absence won’t affect the filming process.
Dead Men Tell No Tales was supposed to hit theaters this year, but it was pushed for 2017 – six years after the last Pirates of the Caribbean movie, On Stranger Tides, came out. In Dead Men Tell No Tales the fans’ favorite pirate will go looking for Poseidon’s trident.