Just when you think Kanye West would stop making headlines for his ridiculous demands or even more ridiculous rants, he does it again!

A week ago an Internet user posted an ad on eBay claiming that he was selling air breathed through Kanye West’s mouth. The product was a small amount of oxygen trapped in a plastic bag. 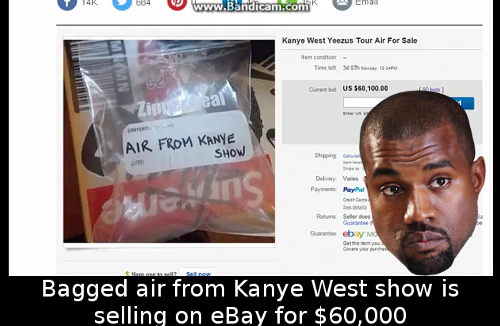 The seller claimed he had caught the breath while being extremely close to the rapper during one of his latest concerts. The starting price quickly escalated from $5 to more than $60,000! The eccentric rapper’s breath was reportedly desired by over 90 people, who bid on eBay for it. The website took the ad down before anyone had the actual chance to pay even a dime for Kanye’s breath. However, shortly after the seller pulled out the stunt, tons of copy cats started doing the very same thing. They posted nearly 25 ads offering the very same thing. Not only that, but some of the sellers also put their concert tickets inside the plastic bags so that they could prove they were really at the concert and were selling Kanye’s breath.

Kim Kardashian, his wife, took the matter to Twitter and bragged that her man could sell absolutely anything.