Guess who is making headlines for her bold moves – and this time they aren’t on the catwalk. Yes, Kate Moss attacked a paparazzi in Paris!

The 41 year old supermodel was about to go clubbing with none other but Lady Gaga herself when she had a mild accident with an insolent paparazzi. 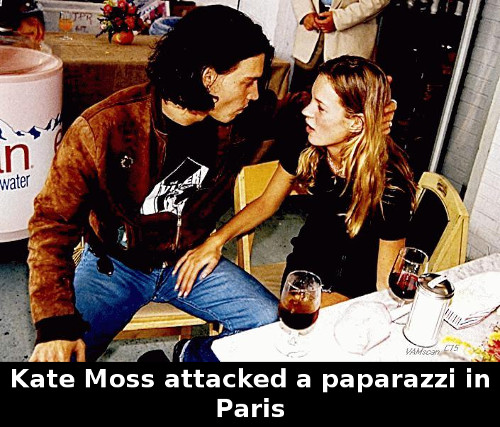 Moss and Lady Gaga were in Paris, France, for Fashion Week and were just about to step into the exclusive Club Haussmann when Moss lost her nerve and attacked one of the snappers, which had swarmed the two celebrities and their entourage in front of the club. A series of leaked photos show the whole accident. A rather scruffy looking Kate is pictured as she’s about to enter the club with the whole gang just before she grabs the sleeve of one of the paparazzi. The stunned photographer didn’t have a chance to react before a bodyguard and a female crew member managed to tear him off of the supermodel. The other paparazzi snapped away as Moss, Gaga and their entourage entered the club. The photographs show that even Lady Gaga was stunned by her friend’s actions.

Shortly after the accident took place the police arrived at Haussmann in order to make sure that nobody got injured.