The news of Sir Terry Pratchett’s passing quickly took over the social media and the worldwide headlines. The British author, who died on the 12th of March this year at the age of 66, is a reason for mourning for millions of people from all around the world. 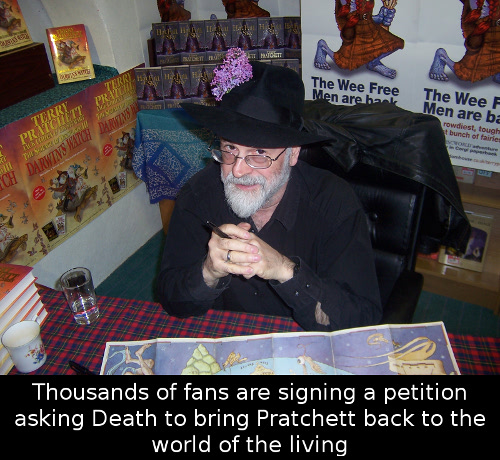 The last three tweets on his Twitter profile stated that Pratchett, who had been suffering from Alzheimer’s for the past several years, had finally embraced Death’s arm. Death was a popular character in his Discworld series – a witty creature with a nasty profession. The author turned Death into one of his most fascinating and lovable characters, so when he died tons of fans started signing a petition asking Death to bring their beloved Pratchett back. The petition was started on change.org shortly after the news of Pratchett’s death surfaced on the web, and it gathered thousands of signatures over the course of a couple of days.
One of the fans stated that Death owes Pratchett this much, while others pointed out that Death should really check the hourglass at least one more time, just to be sure.

The 41st and last book of the Discworld series was finished by Pratchett in summer 2014 and is supposed to hit the market later in 2015.