A decade ago the notorious illusionist and “scientific sceptic” James Randi made an astonishing offer to everyone, who believes in the supernatural – a $1 million prize for the proof of the existence of the paranormal.

His offer, however, had some conditions. In order to truly get proof and not see some tricks with smoke and mirrors like the ones an illusionist would make, Randi set up some rules for those willing to prove the existence of the supernatural. If they are willing to bend a spoon, they can’t use their own spoons. 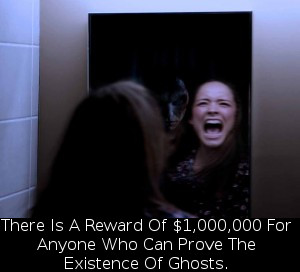 If they are willing to prove they can see auras, they have to do it in specialized controlled conditions. If they are going to show something truly extraordinary and unusual, they have to it in front of a set of cameras, which will be watching their every single move. Randi stated that the offer would expire in 2010, although he’s still offering the whopping $1,000,000 prize.
Apart from him, many others have also offered grand prizes for the proof of ghost/supernatural activity existence. For example, B. Premanand offered 100,000 Indian Rupees ($1,617 in USD) for the same thing and Prabir Ghosh offered 20,000,000 Indian Rupees ($323,500 in USD) for the same deal.