Everybody loves birthdays, well maybe not everybody but a majority of people do. There’s cake, presents, balloons and gifts. Even better is if you like surprises and are thrown a surprise party. A surprise you probably will not like is, having a higher chance of dying. 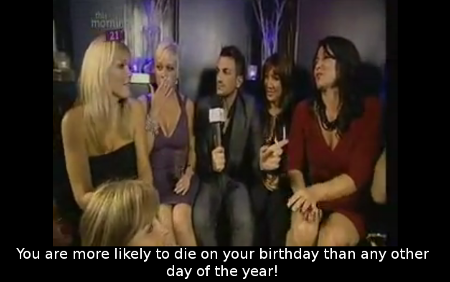 A new study says that women and men are 14% more likely to pass away on their birthday than any other day of the entire year. The results were highest in individuals ages 60 and over. The percentage of somebody their age dying on their birthday was a whopping 18 percent more likely.
Dr. Vladeta Ajdacic-Gross says “We find more deaths than expected solely on birthdays, that is neither in the days before nor after the birthdays.” She is an epidemiologist for the Institute of Social and Preventive Medicine at the University of Zurich.
This huge study was publisher in the Annals of Epidemiology. Data was analyzed from over 2.4 million Swiss people who died between the years of 1969 and 2008. Researchers attempted to figure out if there was any correlation when people died and how, in comparasion to their birthday.
Dr. Ajdacic-Gross said she was surprised that the findings applied to specific causes of death. Suicides and falls along with strokes and heart attacks were all tied to birthdays. He also said that older people are much more vulnerable than somebody of a younger age.
Men’s chances of suicide on their birthday rose to almost 35 percent and their odds of dying in an accident climbed to about 29 percent. Falls leading to death grew by 44 percent on their birthdays and, the amount of falls increased around 4 days before a birthday celebration.
Women are at higher risk of natural deaths, almost 22 percent passed away on their birthday because of a stroke. Heart related deaths rose by almost 19 percent for both men and women.
It was found unexpectedly by scientists that the risk of death from cancer hopped by a whopping 10.8 percent on birthdays. They also seemed to be higher than normal in days following their birthday. This trend is not seen by any other cause of death.
You might be wondering why this happens. Could it be from a birthday celebration? Is it a let down to you that you’re once again another year older? Are you worried because you’re not getting younger at all?
The Dr in charge of the study says that “We can only speculate on the reasons for the extra deaths on birthdays” The rise in cardiac deaths and strokes could be due to stress of a birthday.
Other studies believe that alcohol could be to blame for the suicide deaths and maybe even falls that lead to death.
A theory of an “anniversary reaction” or “birthday blues” are supported in the results. This means that a larger number of deaths happened more often on a birthday. They think this is a better explanation than a hypothesis called “death postponement” meaning deaths are not as likely to happen on birthdays and people may just hang on long enough to reach the milestone every year.
A few famous people have passed away on their birthdays such as William Shakespeare and Betty Friedan.