Tons of marriages in India are actually arranged not because of the bride and the groom’s love, but because of their parents’ common benefits. Thus, it comes to no surprise that this particular bride decided to leave her future would-have-been husband at the altar. 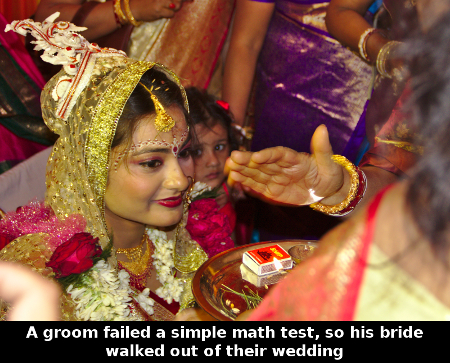 According to official reports, an unnamed woman from Kanpur, Uttar Pradesh, India, was about to marry her fiancé. During the ceremony she decided to test her groom’s intelligence and asked him a simple math question: how much was 15 plus 6. Much to anyone above the age of 7, the groom replied that the answer was 17. The bride then walked out of the ceremony leaving the uneducated man behind. As it turned out, the marriage was arranged by the couple’s parents and the groom’s family had kept the bride in secret about the man’s extremely poor education. The reports claim that the woman was adamant in her wish to not marry her fiancé, regardless of the groom’s family’s attempts to make her do it. Both the bride and the groom returned every single present and gifted jewelry pieces, which they had exchanged before the ceremony.

Maybe now the groom will finally engage in some math lessons.