This is most definitely not the right way to smuggle smartphones in China! According to official reports, earlier this March an unnamed man has set a new record for the largest number of iPhones ever tried to be smuggled through a country’s border. The reports state that on the 6th of March this year, the man in question was caught with a total of 146 iPhones strapped to his body – making him a record breaker. 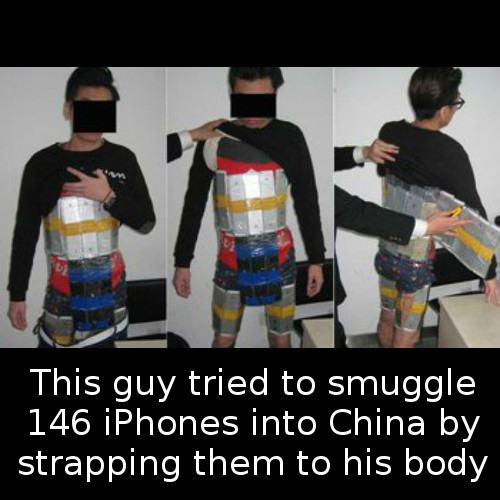 The guy was reportedly walking at an extremely slow pace and had a strangely stiffened posture, although he was caring only a shoulder bag and nothing more. Thus, the border officials decided to make him pass the metal detector test, which he obviously failed. They found a total of 126 iPhones in a belt-like formation strapped to his body and 20 other iPhones strapped to the man’s legs. He tried to smuggle the smartphones from Hong Kong to Shenzhen City in the Guangdong Province. The officials claim that the guy bought the devices in Hong Kong and that many smugglers choose to do so, since the tax rates in Hong Kong are low. Not only that, but it turns out that the very same guy was already busted 4 times while trying to smuggle more than 510 smartphones at different borders!

Not so long ago another man was caught at the Chinese border with a total of 94 iPhone 6 and iPhone 6 Plus devises strapped to his body in a cellphone armor. This guy was only identified as a citizen of Hong Kong, although his full identity or face was never revealed.