Cindy Crawford is a very successful model. But, when she was just a normal 10 year old little girl she lost her little brother to Leukemia. 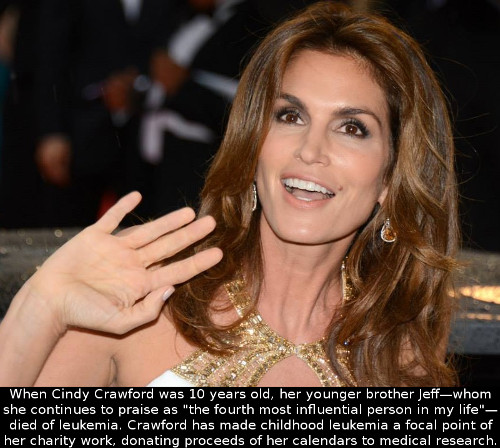 Since Cindy Crawford started modeling she wanted to contribute to childhood leukemia. She made it a huge part of her charity work. Cindy wants a cure found, just as anybody would so, she donates proceeds from selling her calendars to medical research.
The model has been a huge supporter of the pediatric oncology program at the University of Wisconsin-Madison. That is where Jeff was treated. She truly believes in her heart that there was no place that could have taken better care of her brother during his fight through Leukemia.

Cindy Crawford is an honorary member of the Multiple Myeloma Research Foundation. MMRF is a charitable organization dedicated to multiple myeloma, which is an incurable blood cancer. It affects over fifty thousand Americans every single year. The MMRF is not like other charities. Other charities focus on raising public awareness and raising money to give to researchers in hopes that somebody would find a cure. The MMRF runs as it were a for-profit business, they expect high returns from the money that they raise from donors.

A few other charities Cindy Crawford is very passionate about are the Ronald McDonald House Charity and she is also on the Honorary Committee of the California Wildlife Center.