Back in January a UK-based hipster named Tom proved that crowdfunding projects have gone too far. Tom Packer, 26 year old man living in Norwich, UK, came up with some magical formula for finding true love, which includes going on a total of 13 dates with the subject of your affection. The formula includes spending around £100 ($148 in USD) per date. 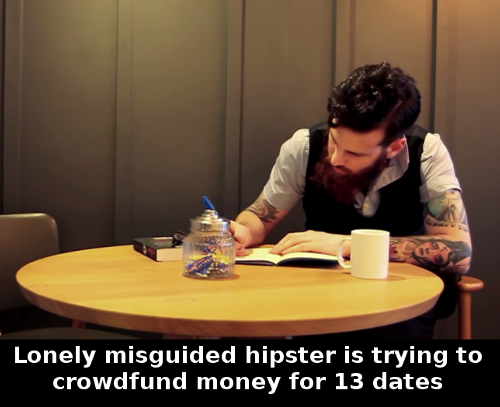 In order to fund his magical formula he turned towards the popular crowdfunding website Indiegogo and put up a campaign. He asked for £1,300 ($1,925 in USD) in order to fund his 13 dates. If you think that all of the above sounds too ridiculous to be true, just take a look at what Tom offered for money:

£10 – an autograph (yes, that included a photograph of Tom’s super hairy face with his signature over it)

£100 – a 100% guaranteed date with him, which had to take place in London, and the donator’s travel costs weren’t covered

If you take a good look at Tom’s hipster appearances (super-sized beard and moustache for a 26 year old guy, tons of tattoos, cropped vests), and the fact that he spends his time bartending and writing poems, you wouldn’t be surprised that the guy is so desperate.