Two 20 year olds from Australia decided to start a charity organization in order to help the homeless people of Australia become cleaner.Nicholas Marchesi and Lucas Patchet, both 20, are two Aussies, who came up with an extraordinary idea which they transformed into a kick-starter charity organization named Orange Sky Laundry. 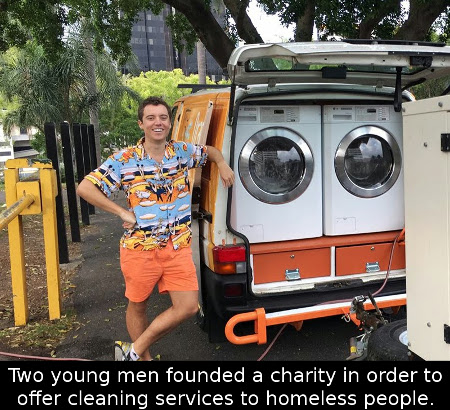 The guys founded the organization last summer and managed to gather 7 volunteers by October 2014. They are still looking for volunteers from Brisbane and Caims and are doing their best to expand the services of the charity. The guys offer free laundry services to the homeless. They move from one location to the other with the Orange Sky Laundry “service centers” – several vans equipped with washing machines and dryers. The boys painted the vans and installed the wall linings for the electrical power points all by themselves. They’ve teamed up with three other organizations – Symbio, LG and Richard Jay – all of which are sponsoring Orange Sky Laundry.
Lucas and Nicholas are hoping that their charity will help the homeless make a difference on the streets in Australia.