2014 was a bad year for Canada’s bad boy Justin Bieber. He got into lots of scandals – from egg throwing to reckless driving and from DUI to racism comments.Back in early 2014 the media went crazy over an old video in which Bieber used the N-word in an improvised lyric of one of his songs. At that time the video was made, Bieber was only 14 years old. 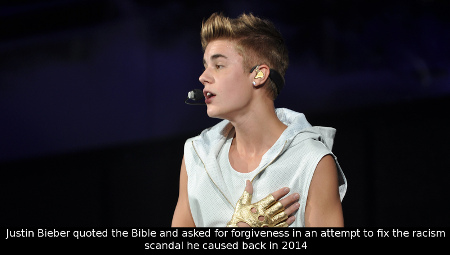 The video went viral last year, when the pop star was 19. In the infamous video Bieber also joked about how he would join the Ku Klux Klan, the scandalous racist movement in the US. Shortly after the video surfaced on the web and started making headlines, Bieber used the Bible in an attempt to mend matters. He posted a snapshot of the Bible on his Instagram. He used one particular passage from the Scriptures in order to ask for the public’s forgiveness.
Bieber’s message was clear – he asked for forgiveness for his sins. Unfortunately, his deeds during the rest of 2014 didn’t seem to show his repentance.