Home » It is nearly impossible to incapacitate someone using chloroform. It takes at least five minutes of inhaling an item soaked in chloroform to render a person unconscious.

Has anyone ever told you that you’re watching too much TV? Well, if you think that you can incapacitate somebody in no time just by applying a cloth soaked in chloroform to their mouth and nose, you’re definitely watching too many movies. 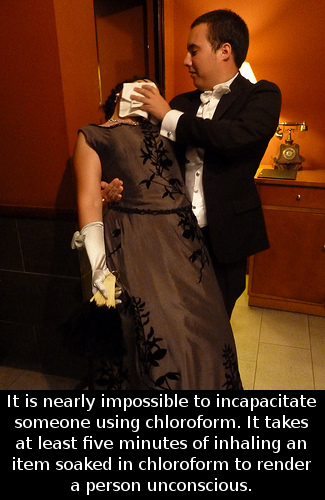 In real life you can’t really knock somebody out instantly in this way. The person in question would have to inhale the evaporations of the substance for at least five minutes in order to lose consciousness. And that’s when the real trouble begins. In order not to have a dead person at your feet, you must prevent the person’s tongue from obstructing his/her airway, otherwise the consequences could be fatal. Since the movie industry has portrayed so many criminals using chloroform in order to quickly knock out their victims, many people believe the substance could be used as an incapacitating agent. However, in real life it’s usually mixed with other incapacitating drugs, such as diazepam or alcohol.
Back in the 1860s the medical journal The Lancet decided to offer a prize to anybody who could prove that he/she could cause “instantaneous insensibility” to somebody with the usage of chloroform. By 1998, there had been no successful attempts made.