Home » Wasabi was originally eaten with sushi to kill bacteria and parasites in the fish.

Old habits die hard. Take the habit of eating the traditional wasabi with sushi, for example.The Japanese horse-radish, which is also known as Wasabia Japonica or Wasabi for short, belongs to the cabbage family. 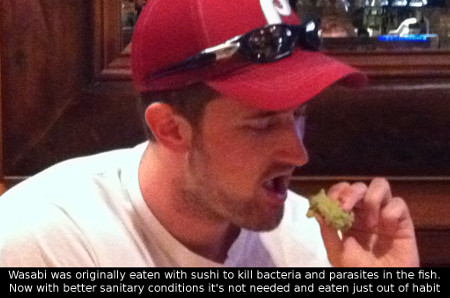 It’s known for the strong burning sensation it leaves. Unlike chili peppers, the wasabi’s heat attacks the sinus cavity. It grows mostly in river valleys in Japanese mountains. Its roots are ground, dried and then made into the creamy green paste we know today. However, since wasabi is actually quite difficult to grow and maintain, most of the wasabi found outside Japan is actually European horse-radish, which is colored with green food coloring in order to look like the original Japanese product.
Most people think that wasabi is eaten with the sushi in order to help the system digest the raw fish better. However, the original purpose of the wasabi was to kill any parasites and bacteria in the fish. Thanks to modern technology and advanced sanitary conditions, we no longer need the hot vegetable. People all around the world eat it only out of habit.