Ever since the very first Ebola virus epidemic invaded Sudan in 1976, few patients have been successfully cured of the usually fatal disease. Nowadays the diseased are treated with blood from already healed patients, although this practice doesn’t guarantee the diseased will be 100% cured. 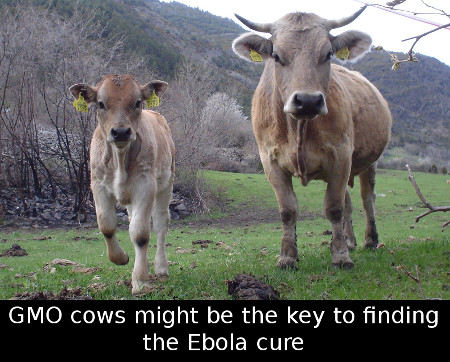 All of this might change if SAB Biotherapeutics’s calculations are right. The Maryland-based company specializes in research and treatment for fatal diseases like cancer, Ebola, influenza and diabetes. They’ve conducted experiments on GMO cows and believe they could be the key to finding a cure for the Ebola virus. The company injected 50 cows with human DNA and found that when the cows were vaccinated against multiple diseases, the cattle’s bodies were producing a great amount of antibodies. These GMO part-human, part-animal antibodies were in much larger quantities than the ones found in the system of cured Ebola patients. SAB Biotherapeutics Inc. believes that if they inject the GMO DNA from the cows into a diseased person, the cattle’s antibodies could save his/her life. The company claims that they can obtain 30 – 60 liters of cow plasma per month or 500 – 1,000 human doses of antibodies per month from a single animal!