We’ve all had hours of fun on the Internet just looking at memes and wasting our lives away behind our electronic device of choice.

When these ordinary people got turned into an extraordinary symbol of laughter, their lives changed.

Let’s take a look at some meme heroes and what they look like now.

When Villanova was kicked out of the NCAA Tournament this year, one sad band member who played the flute became a viral meme, “Crying Piccolo Girl.” Roxanne Chalifoux was that piccolo player, and her fleeting internet fame landed her a guest appearance on Jimmy Fallon’s show.

“What does the fox say” was a viral YouTube music video that was watched over 336 million times. What does Ylvis, the duo behind the song, look like in real life? Ylvis, a Norwegian group comprised of two brothers, looks like this when they aren’t dressed as seals or foxes. They haven’t really done much that’s notable since 2013, but they did release a single in 2014.

Millions of people have seen Scumbag Steve, whose actual name is Blake Boston. The picture was taken by Boston’s mother when her son was 16. Here’s Blake Boston in real life. He’s now 23 and he’s owning his scummy identity on his Tumblr, which reads: “I’m down with the meme. Also F— you. The internet made me and I’m f–king running with it, wouldn’t you? What choice do I have? You kind of owe me for the laughs no?” 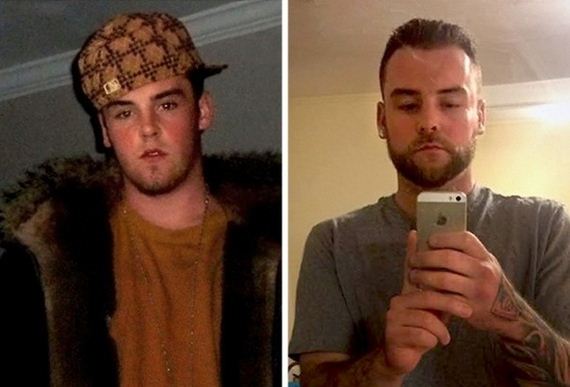 Sammy Griner’s mom posted this picture back in 2007, when Sammy was a wee lad of 11 months old.

The buzz generated by the picture brought up enough money to pay for his dad’s kidney transplant, saving his life in the process. 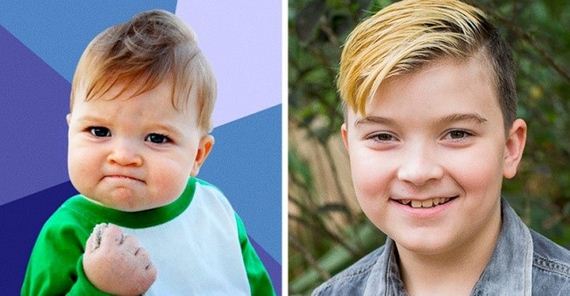 While this may look like this girl, Zoe Roth, really likes arson, the picture was actually taken at a training session for local firefighters. Yay, she’s not a real psychopath!

One of the most famous internet memes is The Ridiculously Photogenic Guy. It stars 26-year-old Zeddie Little, who happened to be running a race and was spotted in the background of a group photo by Facebook users.