Forget about the cheese jokes, Kim Jong-Un’s eyebrows are making the headlines these days. 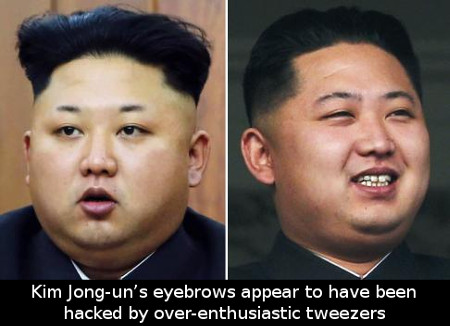 During a press conference held by the leader of North Korea in Pyongyang on the 31st of December 2014, Kim Jong-Un spoke about on a variety of topics, including hinting at a possible diplomatic negotiation between South and North Korea. However, many people were more interested in the dictator’s eyebrows than his speech. During the past few weeks Kim Jong’s eyebrows have been mysteriously shrinking. Photographs from early 2014 and 2013 show the leader with normal eyebrows. However, the most recent pictures show that somebody appears to have been over-plucking over the holidays. Kim Jong’s eyebrows are currently barely there – not only are they extremely off point, but they are also extremely short. And social media is going crazy over them! There are already tons of hilarious tweets with jokes about the North Korean leader’s disappearing brows and before/after pictures are surfacing from all around the web.

The bad news is that it will take months for Kim Jong to grow back his brows. The good news is that some news agencies have already recommended products to help, such as Rapid Brow and Blink’s Brow-Hab.