Earlier in 2014 stories about people suffering from a mysterious “sleep epidemic” started surfacing on the web. Residents of the Russian village Krasnogorsk and even people who were only visiting the village started sleeping non-stop for up to 6 days. 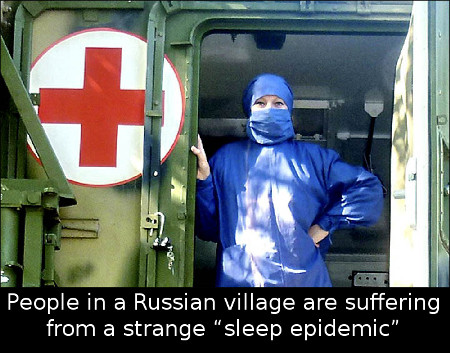 One 50 year old woman named Marina Felk fell asleep while milking her cows and awoke in the hospital two days and two nights later. Another similar case is that of 30 year old Alexey Gom, who was visiting his mother-in-law. He suddenly fell asleep shortly after walking into the region. Many other men and women living in the Krasnogorsk region started exhibiting the same mysterious phenomenon. Local medics have been running all sorts of tests for viruses, infections, blood pressure problems and even for abnormal spine liquid. However, none of the tests showed the reason for the sleeping epidemic. Some people believe that the phenomenon could be linked to toxic gas originating from an old mine located near the village. However, many medics have already successfully refuted this theory.
So what is causing people in Krasnogorsk to fall asleep for up to 6 days in a row?