UFO sightings have been reported from all around the world from time immemorial. 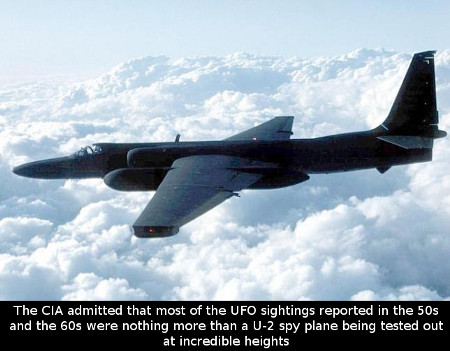 At the end of 2014 the CIA decided to do a 2014 Year in Review. They made a Best of 2014 list and it turned out that their most popular and most read document from the past year was the one in which they confirmed that they were responsible for most of the 50s and 60s UFO sightings! That’s right, it turned out that during that time the CIA was testing their U-2 planes – spy aircrafts, which were being flown at 60,000 and more feet in the air. At that time people didn’t know an airplane could reach such heights, so they thought the planes were UFO aircrafts. The document explained that most of the reports about unusual aircrafts from the 50s and the 60s were the result of people seeing the U-2 planes being tested.