If you haven’t heard of Jen Selter, you’ll be shocked to realize that she’s not famous for her social status, her talents or her heritage. She’s famous for her pictures and her body. 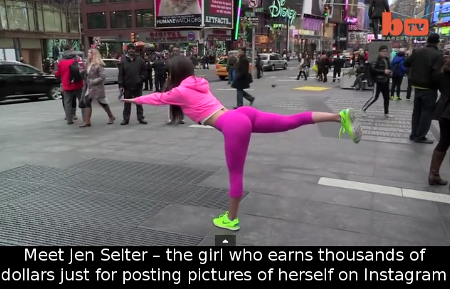 Over the past year and a half, Jen has been earning $50,000 each month from posting pictures of herself on Instagram, Twitter and Facebook. Because of her voluptuous rear end she has more than 776,000 followers on Twitter alone. Jen posts tons of pictures of her behind usually dressed in tight fitness tights or bathing suits. She also posts various fitness and dieting tips, which is another reason why she has so many friends and followers. A great number of clothing and nutrition companies pay her thousands of dollars to advertise their products. Magazines and sponsors choose her for her looks and for the advertising power she has over her fans. However, Jen only agrees to post one advertising picture per month and usually up to $50,000 for it.

The 21 year old claims that she doesn’t care if people say that her behind is fake, Photoshopped, stuffed with implants or if it’s bigger than Jennifer Lopez’s. According to her own words, she just gets a kick out of knowing she can inspire people to work out and have a better diet.