One Twitter user going by the nickname “Adamstone341” decided to play a little prank on UK retail giant Tesco. A small, but absolutely hilarious prank! 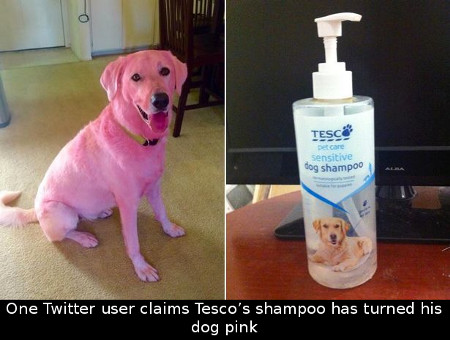 Adam tweeted to Tesco that he has a major problem with one of their products and that he wanted to complain about it. Shortly after he sent a second tweet, this time accompanied with two snapshots – one of a bottle of Tesco dog shampoo and one of his pet Labrador. The only thing wrong with the second snapshot, portraying the cute and delightful looking pooch, was the fact that every inch of the dog’s fur was pink! The tweet asked Tesco why their product has turned the doggie’s fur from a lovely shade of sandy brown to a vibrant pink. Adam posted the tweet on the 5th of January this year and it has already reached more than 52,000 retweets and 58,000 favorites. Some Twitter users stated the obvious fact that the dog looks extremely happy with his new look, while others said they were sorry the picture was only a prank. Tesco confirmed that the story was a joke and stated that their products will make your pets look prettier, but definitely not pretty in pink.