A popular reality star, entrepreneur, actress and aspiring socialite was hoping to enhance her lips with the help of plastic surgeons, but didn’t get the results she was hoping for. 23 year old Farrah Abraham, who became famous for starring in Teen Mom, was hoping that 2015 would be a good year for her. 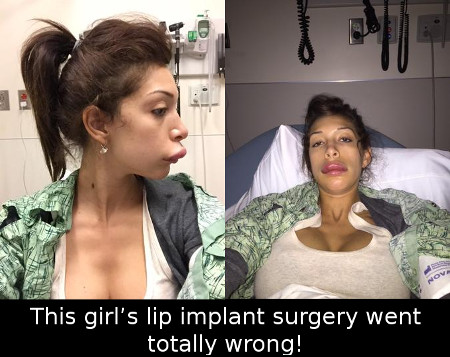 First, she announced that she was going to open up a frozen yogurt store, and then she decided to undergo some beautifying procedures in order to change her appearance. The reality star thought that plastic surgery would serve her well and instead of opting for the more popular method of lip injections, she went directly for lip implants. Unfortunately, the anesthetic the surgeons used on her ruined her appearance, rather than enhancing it. Farrah ended up with a deformed, swollen and scary looking upper lip thanks to an allergic reaction to the anaesthetizing agents. The young actress didn’t bother hiding the horrific results from the rest of the world and posted pictures of her lips on Twitter.

One of the pictures compared her to the animated character Leela from the cartoon sitcom Futurama.
After comparing herself to the character, Farrah sarcastically said “Gotta love my new look”. At least she’s looking on the funny side of the unhappy situation.