Loving your pet is one thing, but marrying it? That’s just absolutely crazy! Barbarella Buchner, a 48 year old woman from Spain, has been surrounded by cats ever since her early childhood years. 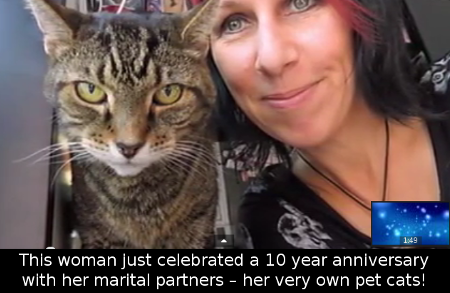 However, she never felt that her parents’ cats were her own. When she was 34 she finally adopted her very own two feline friends – brothers Spider and Lugosi. Ms. Buchner never wanted to marry any of her long-term partners and when she broke up with her last ex, with whom she had been in a relationship for 7 years, she thought she wasn’t able to love a person anymore. That’s when she realized that Spider and Lugosi had been by her side regardless of the problems she had been going through. She felt like they had always had her back and that their relationship was stronger that any relationship she could ever have with a human being, so she married both of them. She recently celebrated 10 years of wedded bliss with her cats and claims that they are her soulmates and that the three of them have the perfect relationship.

As to what other people are saying about this strange relationship – Ms. Buchner says she doesn’t care about their opinion.