Home » Miley Cyrus’ father hired her to pick up the bras and undies that his fans threw onstage during concerts.

It may come as a shock, but Miley Cyrus was a rebel long before she entered the shocking phase which came to prominence back in late 2012 and especially early 2013. Even before the former Disney star became famous as the sweet girl from Hannah Montana, Miley was getting into all sorts of trouble. She got kicked out of a prestigious school for stealing a teacher’s scooter. She also auditioned for Hannah Montana regardless of her father’s disapproval. She got a tattoo without consulting with her mother. 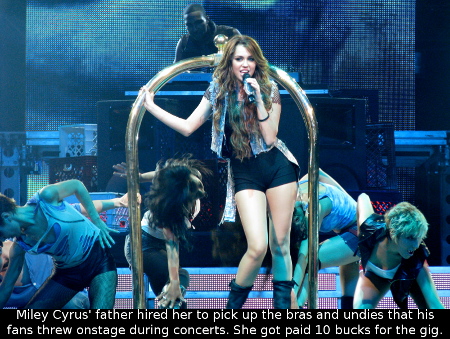 And long before she could even imagine acting the way she does nowadays, her own father may have planted the seeds of provocative behavior in his daughter. In an interview for Rolling Stone in 2013, Miley shared with journalists that when she was still a child Billy Ray would take her with him on tour. Whenever his fans threw their underwear on the stage, he would tell Miley to go pick them up and would later reward her with $10 for a job well done.
Her mother, on the other hand, still sees Miley as her little baby girl. The 22 year old pop star shared an embarrassing memory, in which her mother talked in baby talk to her in front of Kanye West at the VMAs backstage.