It is said that the secret recipe for Coca-Cola is only known by two people in the entire world. This isn’t exactly true. It is not known as publicly how many people truly know the recipe but, there are probably more than two people who know this recipe because of the fact that the volume of the drink being produced every day is so ginormous. Although there are slight differences in ingredients throughout the world, large amounts of the ingredients need to be known by quite a few people. It seems impossible for a drink that is produced on this large of a scale, that the ingredients would only be known by two single people. There’s a myth that’s even more far fetched. It is believed that the of two people who are rumored to know the recipe, each only knows one half of the recipe. 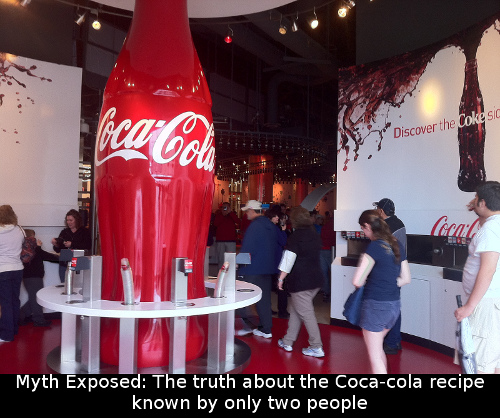 Now, you are probably wondering, where did this legend that only two people know the recipe start? Was the secret recipe of Coca-Cola EVER only known by two people? Actually, yes. This was once true. The first person who knew the final recipe was John Pemberton, he showed the recipe to whomever it was and that made it two people who knew the recipe. Then, it was very clear that at least several people have known the secret at any certain time.

The secret behind the recipe began when Asa Candler bought the exclusive rights to this recipe in 1891 Before this, Pemberton sold the original formula to three other companies, meaning that now, even more people knew. When the rights were exlusively in the hands of Candler, all other copies of the recipe were destoryed. He relied on the other employees to keep it a secret. This wasn’t a good strategic move in the long run for a company of this size.

When the company was yet again taken over in 1919, the formula was yet again known in physical form. With that being said, Coca-Cola claimed that the recipe was never actually written down on paper until 1919. It is very very unlikely that the man who created Coca-Cola wouldn’t write down the recipes that led to the final version used in Coca-Cola. This soda was originally created to cure Pemblertons morphine addiction.

There is a good reason that Coca-Cola claims that the recipe was not ever written down. There are a few copies for a version of the soda in existence today. At least, this is claimed to be that way.
If you want to recreate Coca-Cola, in the United States that is, you will need something that only one single company has access too. That is coca leaves. Right now, only Stepan Co can actually import these into the United States. They process them and sell the cocaine free extract to Coca-Cola and the cocaine goes to a pharmaceutical company. It is highly unlikely that you could get this company to distribute this plant to your company.