If Nina Dobrev and Ian Somerhalder knew what they were getting into back in 2009, they probably would have thought twice before auditioning for The Vampire Diaries. 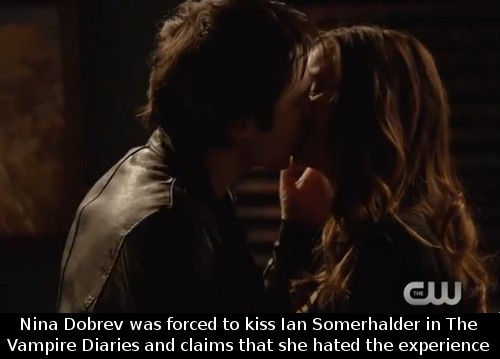 The hit TV series transformed them into Hollywood’s most desirable young actors and raised their paychecks to tens of thousands of dollars per episode (during 2012 Somerhalder earned $40,000 per episode). However, once the actors started dating in real life just like their on-screen characters Damon and Elena, things got out of hand. Being under media scrutiny was one thing, but things got really bad once they broke up. Fortunately, the producers and the writers of the CW series decided to take it easy on their lead actors, so they came up with a plot which would separate Nina and Ian’s characters. However, with the mid-season hiatus coming to an end the fans will once again see Elena and Damon’s relationship the way it was before they were separated. Meaning – lots of passionate and awkward scenes for the two actors.
According to some unnamed sources, Dobrev was already forced to kiss her co-star for the upcoming 11th episode of season 6 and she reportedly hated every single second of the experience. Somerhalder probably feels the same away about having to film passionate scenes with his ex-girlfriend in front of the camera and the entire cast and crew of the show.