Dylan Siegel, an 8 year old boy from Philadelphia, was only 6 years old when he learned that his best friend, a boy named Jonah Pournazarian, had an extremely rare incurable disease. It turned out that Jonah was suffering from a liver disorder, known as glycogen storage disease type 1B. Around 500 kids from all over the world have been diagnosed with this disease. 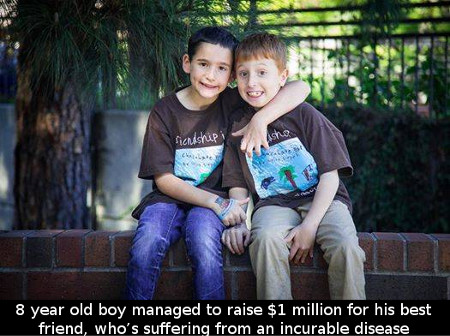 Dylan wanted to help his best friend, so he came up with an idea on how to raise money for research. He wrote a book called Chocolate Bar. During the last few years the book has been sold in 60 countries. The 25,000 copies of the Chocolate Bar have made profits of nearly $1 million and have spawned tons of memes on the web. The 8 year old boy’s efforts have made it possible for the University of Florida to launch a new gene-therapy research and a possible treatment for the illness.